Hello everybody!  Fall has come and gone and it seems like the community has been making great use of the Commons.  We’ve got some business to report but also some winter fun to look forward to this weekend.  First, the business…

As you may be aware, the Commons Project was supported by a $1.8M grant from Empire State Development Corporation.  This week, we received the following notice from the State regarding a public hearing at City Hall.  “[As part of its funding obligations], a public hearing will be held by the Corporation at City Hall, Council Chambers, 108 E. Green Street – 3rd Floor, Ithaca, NY  14850 on Monday, December 14, 2015 from 1:00pm to 2:00pm.  You are welcome to attend this hearing and make a statement about the project if you wish.”

The Downtown Ithaca Alliance’s Ithaca Ice Festival started last night with the opening of the Ice Bar at the Bernie Milton Pavilion. 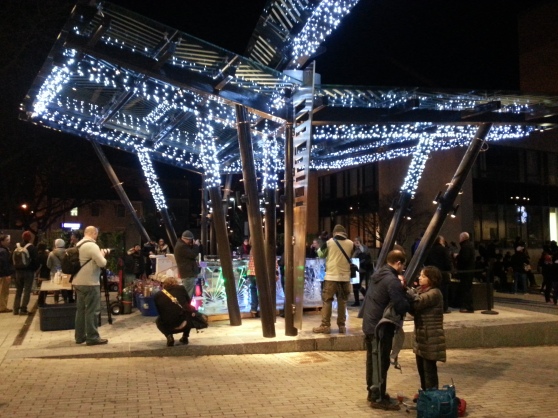 The DIA has also been hard at work putting up Holiday Lights and making good use of the open streetscape to create a festive atmosphere. 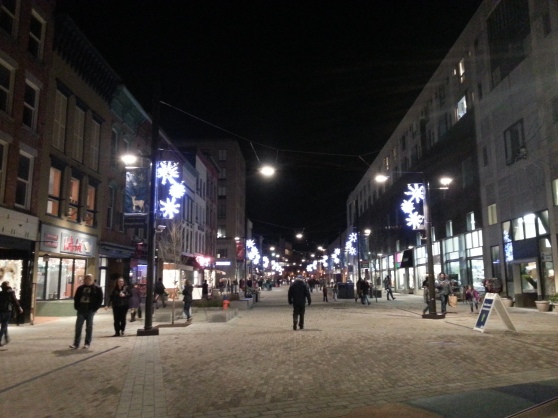 Pardon the bleak, washed-out colors from the cell phone camera.  It looks be-dazzling in person. #needfilters

Come down and see the Ice Bar and sculptures before they melt!

We did it! The Ithaca Commons Repair and Upgrade Project is now complete.  We would like to say so long and good riddance to the mud, dust, noise, fencing, cones, dead ends, long days and sleepless nights, weather forecasts, vacuums, critical path lists and….UPDATES.

Thank you for your patience, understanding, determination, and for working with us to do our jobs better and help make this project a success.we

We wish the best of luck to the merchants, residents, downtown workers, visitors and the community that will make the Commons a prosperous place for years to come! 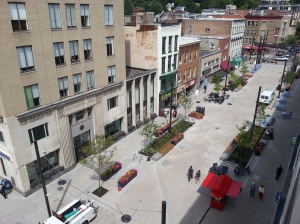 The playground is here!!! Moments after the fence was removed from around the playground, kids were on it. It is a great magnet for kids of all ages, parents and grandparents. 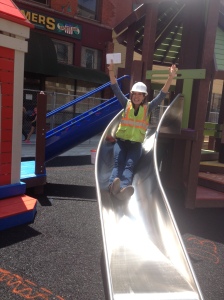 The light pole base covers are being installed. These are temporary covers. The permanent base covers will be installed at a later time.

200 Block –
Bike racks will soon be installed on the Aurora Street bumpout along with a newspaper box. A small amount of road work will be done to align the road way to the new curb. Other than that the 200 Block is complete.

100 Block –
The planters between Trolley Circle and Home Dairy Alley will be planted the week of 7/20/2015. Once planted, the fence will be removed and more blue movable furniture will adorn the Commons.

The pavers will continue to be installed on the west end. Once the pavers are installed they are swept with polymeric sand. The current plan, which is weather dependent, is to sweep the north sidewalk from Benjamin Peters to Optivision on Monday, 7/20. The sidewalk will be closed from approximately 6:30 AM – 9:30AM. Residents will be able to come and go from their apartment buildings during that time and employees will be allowed to get to their business. We encourage employees to use their backdoor before 9:30 if possible. No through traffic will be allowed until the sweeping is complete. On Tuesday, the south sidewalk will be swept with polymeric sand from Race (where Rev is now temporarily located) to Casablanca Pizza. Again the sidewalk will be closed to through traffic with the exception of residents and employees.

The gateway structure at the Cayuga St entrance was installed on Friday, 7/17.

A work zone will be created at the end of the Commons where E. Seneca and N.Tioga Street intersect to create a bumpout which extends approximately 8’further into the intersection from the previous curb line and is intended as a pedestrian safety measure.

Sections of the 100 and 200 blocks of East Seneca Street will be reduced to one parking lane and one travel lane effective 7AM – 6PM for three to five days.  Travel lanes will be open during non-work hours.

RECOMMENDED DETOURS: No detours are being put in place; however, motorists should expect delays and should seek alternative routes if possible 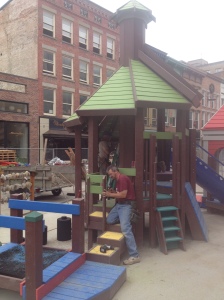 The playground surfacing being installed….

The last phase of work on the Aurora St and Cayuga St entrances began the last week. There will be a “bumpout” at each entrance. The bumpout extends approximately 8’further into the intersection from the previous curb line and is intended as a pedestrian safety measure and to create a more welcoming entrance to the Commons. Once the concrete slab is complete at the entrance, pavers can be installed. The Aurora St entrance will be finished first, then the Cayuga St entrance, followed by the Seneca St entrance. The chainlink fence will be completely removed at Aurora St once the pavers are installed at that entrance.

The installation of the playground is scheduled to begin on 7/2 and will take approximately one week to complete. Once the structure is finished, the rubberized safety surfacing for the playground will be poured in place.

The pavers are now approximately 80% complete moving west toward Cayuga St. The chainlink fence will be removed as the work continues to move west and planter railings and soil are installed at the finished areas.

Many people are enjoying the new tables and swivel chairs. Contrary to media reports, the chairs were installed exactly as per the design documents. Unfortunately, due to a design error, the backs of the chairs come into contact with the table edges. We are working with the architect on a permanent solution but in the meantime, the City has put plastic bumpers on the side of the chair for reduce the stress of the impact. You may notice that there are three chairs per table. This is to allow a person in a wheelchair or stroller to also be at the table. 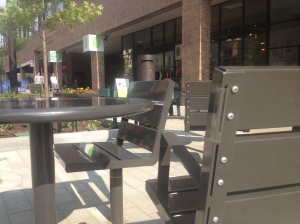 The wooden benches are now installed on the 200 block. These benches are mounted to the granite blocks that are adjacent to the planter areas.

Nine sets of movable tables and chairs have been set up on the 200 block. This moveable furniture is intended to be set up all over the Commons after construction is complete.

The streetlighting is complete except for one section of the catenary lights near Aurora St and one light head for the playground, where we are waiting for replacements for defective materials.

The traffic signal lights near the “ITHACA COMMONS” sign on the Aurora St Gateway Structure have been raised so that the sign is now visible from  the vehicular lane on the 300 Block of East State. The City is continuing to work on a solution for both entrances so that the visual conflict between the traffic signal assembly and the gateway structure can be diminished.

The Commons is on schedule for substantial completion on July 31 and the opening celebration August 28-29.

200 Block (Aurora St to Trolley Circle)
The pavers are 100% complete.  Much of the area was opened up for pedestrian traffic in time for the Ithaca Festival on May 29. The two sets of fixed tables and chairs were particularly popular with visitors since becoming available for public use.  Planter railings are being installed this week, which will be followed by soil, landscaping and furniture next week.  As soon as the planting soil is installed, the chain link fence can be permanently removed. The gateway structure is complete; however the bases will still need to be protected from the public until the final work to complete the new bumpout is done. At each entrance of the Commons there will be a “bump out”, where the curb extends 8 feet into the street beyond the existing sidewalk. There will be bike racks at each bumpout as well as through out the Commons. 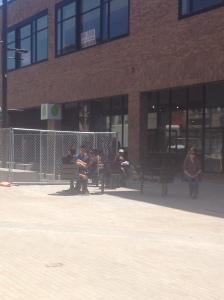 Trolley Circle
The pavers are complete in Trolley Circle and the space is open for pedestrian access. The trolley tracks will be etched in the granite as well as the location identifiers, such as Buttermilk Falls, Ithaca College etc.

100 Block (Trolley Circle to Home Dairy Alley)
The pavers are 90% complete. After the pavers are complete, the sequence to complete this area is similar to the 200 Block:  planter railings, soil, landscaping and furniture. The north south pedestrian crossing across from Home Dairy Alley is closed while the pavers are installed. Another pedestrian crossing was created near Mia’s Restaurant. As always, when the sidewalk is blocked for construction, please look for signage indicating the best route through the Commons.The Child of Ithaca Sculpture is now back on the Commons.

100 Block (Home Dairy Alley to Cayuga St)
The final planting area is being excavated this week near Pack n Ship. Work on the remaining trench drains is also continuing. Once complete, the remaining existing sidewalk on the north and south side will be removed and a concrete slab poured down the middle. On the north side this will be from the old Jabberwock building to Cayuga St and on the south side this will be from the Potters Room to Cayuga St. When a sidewalk is closed, please look for signs for the best route. The granite bench blocks and planter curb will be installed in mid-June at the four final planting areas. The playground installation scheduled for July in front of Benchwarmers. The MLK sculpture will be installed near its former location at Cayuga Street. The gateway arch is scheduled for installation in early July.

Furniture, Commemorative Plaques
Movable tables and chairs will be brought to the Commons as soon as construction is completed in a given area. The 200 block will be the first to be adorned with the new furniture as well as more movable planters next week. Bike racks have been installed on the 200 Block and two sets of Big Belly trash and recycling units have been installed on Bank Alley and the 200 Block. 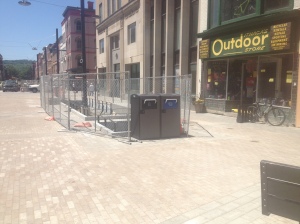 Several commemorative plaques from the Old Commons were salvaged for re-installation in the new Commons. The Bernie Milton, Commons Dedication and City Underfoot plaques have been installed at Bank Alley and the 200 Block. We will continue to install the remainder of the plaques as areas are completed. 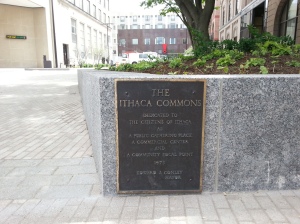 Located where the first sundae was made –  216 E State St.

Bernie Milton Pavilion
Finish painting of the exposed steel welds will be complete this week. The glass roof is scheduled to be installed in mid-July and will take about two weeks for installation. 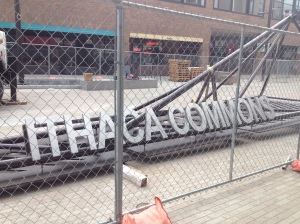 The arch for the gateway structure near the Aurora Street entrance, will be fastened to the columns Friday morning.

Monday through Thursday, starting, 5/18, the existing sidewalk will be removed and replaced with the new concrete slab from Benjamin Peters moving west to Moonshadow. When entering the Commons from Cayuga Street on Monday, pedestrians can access Home Grown Skate Board, Optivision, Moonshadow, Now You’re Cooking, Loose Threads and Benjamin Peters. For access Tuesday through Thursday please look for signs for the best route.   All other businesses can be accessed by walking along the south side near Pack n Ship. 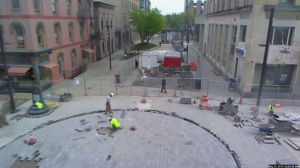